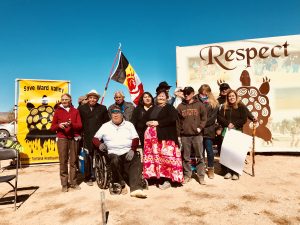 Grassroots community leaders and organizations wanted this new organization to provide effective and strong campaign, organizing, strategic, technical, media and networking support for community struggles and for the environmental health and justice movement…..and Greenaction was born.

Grassroots leaders from urban, rural and indigenous communities volunteered to serve on our Board of Directors, providing true community leadership to guide Greenacton’s work.  These community leaders decided that our Board would always be comprised virtually entirely of grassroots leaders from environmental justice communities, ensuring that Greenaction would always remain true to our founding principles.

We continue our commitment to these and other communities today.

Every year Greenaction joins the Fort Mojave Indian Tribe, other Native Nations and allies in the Annual Celebration of the epic struggle and victory that saved Ward Valley, the Colorado River and sacred Indigenous lands from a proposed nuclear waste dump. Ward Valley is in the Mojave Desert of California.

This was our very first campaign and was one of the key struggles that launched the formation of Greenaction in late 1997.  Greenaction played a leading role with our allies in the Colorado River Native Nations Alliance (Fort Mojave, Chemehuevi, Quechan, Cocopah and Colorado River Indian Tribes) and a huge and diverse coalition of community, health, environmental, labor, environmental and social justice groups in blocking plans by the government and US Ecology to build a nuclear waste dump at Ward Valley on sacred lands, above an aquifer with pathways to the nearby Colorado River.

When all other efforts failed to stop plans to conduct test drilling for the proposed nuclear waste dump, Greenaction, the Native Nations and hundreds of allies took direct, nonviolent action. On February 12, 1998, together we joined hundreds of people and occupied the federal land at Ward Valley, barricading the roads as tribal elders, traditional singers and dancers began ongoing ceremonies – in defiance of a federal eviction order. The standoff against federal police lasted 113 days, ending in victory when the White House and federal government dropped plans for test drilling for the proposed dump. Today, Ward Valley remains nuclear free, and is a special place of great beauty and a symbol that the people united can win against all odds.

Greenaction was honored to be on the frontlines of the historic Ward Valley victory, and it continues to inspire us and people everywhere with the knowledge that we, the people, can actually win against all odds.