Published by Greenaction for Health and Environmental Justice on June 1, 2020June 1, 2020

Greenaction for Health and Environmental Justice stands in solidarity with Black Lives Matter and joins with all those in our nation and around the world that continue to protest and stand up against police brutality and racial inequality. Greenaction continues to condemn the murder of George Floyd, Breonna Taylor, Ahmaud Arbory and all those who lost their lives senselessly to police brutality and white supremacy. The assault on black and brown bodies is not a new pandemic. White supremacy is not a new illness.

The technology of this day is a tool that provides the world a front seat view of what black and brown bodies in this country have witnessed and fought against for generations. The trauma that is induced due to repeatedly watching African American men and women being murdered and abused at the hands of police is now spread among the world but is only a taste of the trauma that the African American community has endured for generations. Greenaction recognizes that trauma and that people of African American ancestry are truly struggling mentally and spiritually during these times as we know by the experience of our own staff. Our hearts, prayers and solidarity are especially with those that are struggling to smile, to work, and to live their daily lives during this time. The vast movement we are experiencing today was a growing bubble that has finally burst. The mistreatment, abuse and murder of black and brown bodies must STOP.

We rejoice in the first step of justice as the four officers have been arrested and charged with their collective murder of George Floyd. However, Greenaction calls for all four officers to be convicted and for justice to be served as so many cases have resulted in no convictions and injustice. We also call for justice for Breonna Taylor and that all officers involved are held accountable.

We continue to be enraged by the way the police force and government has handled this movement. Seeing continued assaults on peaceful protestors by the police and national guard is disgusting. Trump having protestors tear gassed to take a photo is appalling. We will not be intimidated by Trump, violent police and military and will continue to nonviolently protest.

Complete reform to the racist system that makes police brutality and inequality possible needs to happen. This is the same system that provides the foundation for the environmental racism we see and fight against daily in the communities that we work alongside. It is not coincidence that these same working class communities of color that are unfairly and heavily policed tend to be the same communities with major polluters in their backyard such as incinerators, landfills, waste treatment plants and major freeways running through their communities. These communities tend to have high asthma rates and cancer rates than their sometimes adjacent predominantly white neighborhoods. These communities already have health disparities and adding a health pandemic like COVID-19 only highlights that fact. These communities are assaulted socially and environmentally. Black lives matter period and should not have to endure these assaults while being expected to pull themselves up by their bootstraps.

Greenaction is committed to fighting these injustices as we have done for over 23 years. We are committed to the hard work of advocating, organizing, taking action and working alongside the communities we serve after the news coverage is on to the next topic. Justice is Justice! Black Lives deserve Equality Socially, Economically, and Environmentally! Black Health Matters! Black Lives Matter!

The Cahto Tribe and residents of Laytonville have suffered profoundly high rates of deaths and illnesses that many believe are related to the contamination of the Laytonville landfills. We need your help fighting for the Read more… 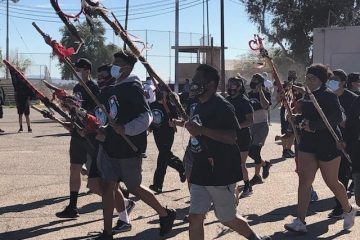 Save Indian Pass and the “Trail of Dreams”

Action Alert! Save Indian Pass and the “Trail of Dreams” from a proposed Cyanide Heap Leach Gold Mine Support the Quechan Tribe’s campaign to stop KORE Mining from getting permits for a cyanide heap leach gold Read more…