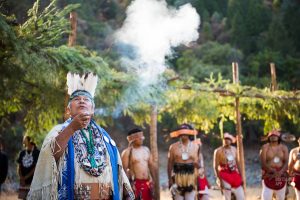 The Winnemem Wintu tribe is indigenous to northern California and has been formally recognized by the California Native American Heritage Commission, an agency of the State of California with responsibility for preserving and protecting Native American sites and cultural resources in California. In the Winnemem language ‘Winnemem Wintu’ translates to Middle Water People as the McCloud River is bounded by the Upper Sacramento to the West and the Pit River to the East. The Winnemem once numbered approximately 14,000; by 1910, after several decades of conflict with white settlers, that number had plummeted to 400.  Today the tribe’s population is approximately 150.

Since 1985, the U.S. government has refused to grant federal recognition of the Winnemem Wintu tribe which significantly and negatively affects the tribes efforts to retain and practice their culture. The lack of federal recognition jeopardizes the tribe’s continued existence in the Mount Shasta area and has cut off federal benefits that are provided to tribes with federal recognition and which the federal government previously provided to the Winnemem Wintu.  In the face of these hardships, the tribe strives to preserve its native language, practice its religion and traditional healing methods, and protect its sacred sites and burial grounds from further encroachment by the federal government.

In 2017 Greenaction joined the Winnemem Wintu Tribe on the historical 300 mile long Run4Salmon journey led by Chief Caleen Sisk. The two-week journey seeks to raise awareness about the importance of protecting waterways, restoring endangered salmon runs, defending sacred sites and revitalizing indigenous lifeways in the face of climate change and ecological collapse. The prayer run begins in the San Francisco Bay Delta with the Ohlone people at Sogorea Te and prayerfully follows the same journey that the Chinook winter-run salmon take upstream to Winnemem lands.

Greenaction stands in solidarity with the Winnemem Wintu Tribe against the proposal of the raising of Shasta Dam. In January of 2019, Greenaction submitted EIR scoping comments for urgent issues that must be addressed in the Environmental Impact Report for the proposed Shasta Dam Raise Project. Greenaction submitted these comments at the request of the Winnemem Wintu Tribe whose environment as well as culturally significant and sacred sites will be negatively and irreversibly impacted if this project is approved.