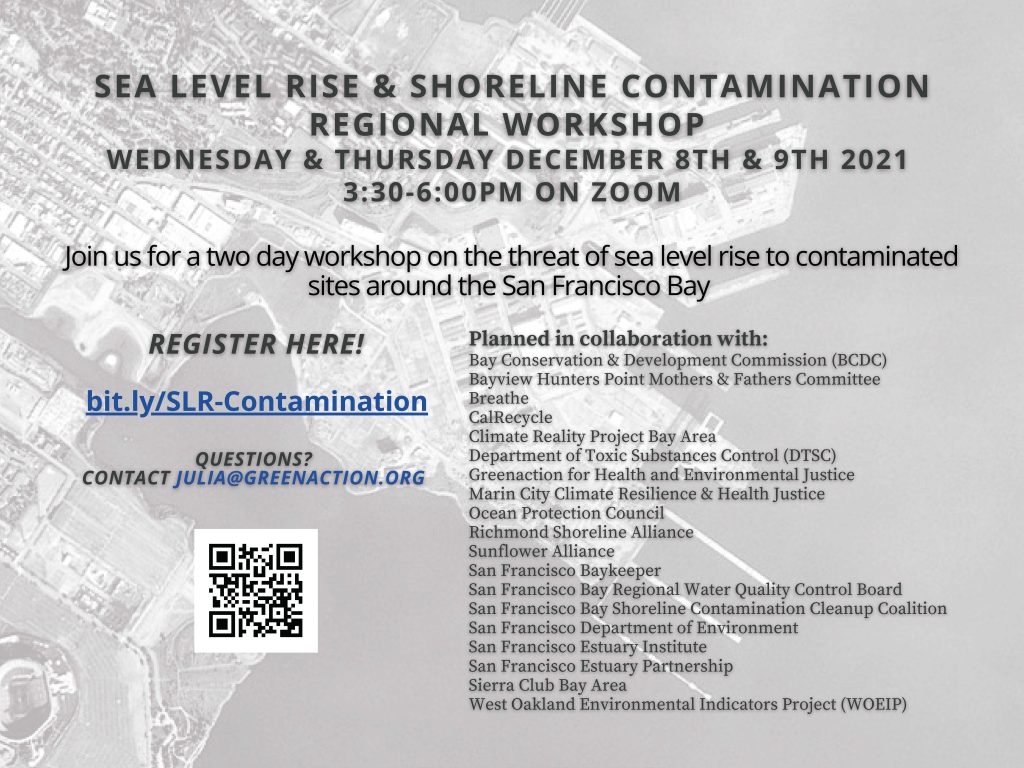 October 7 & 8, 2021: Indigenous People and Environmental Justice at White Mesa: Confronting the Last Uranium Mill in the US – virtual conference – see agenda and how to register and participate 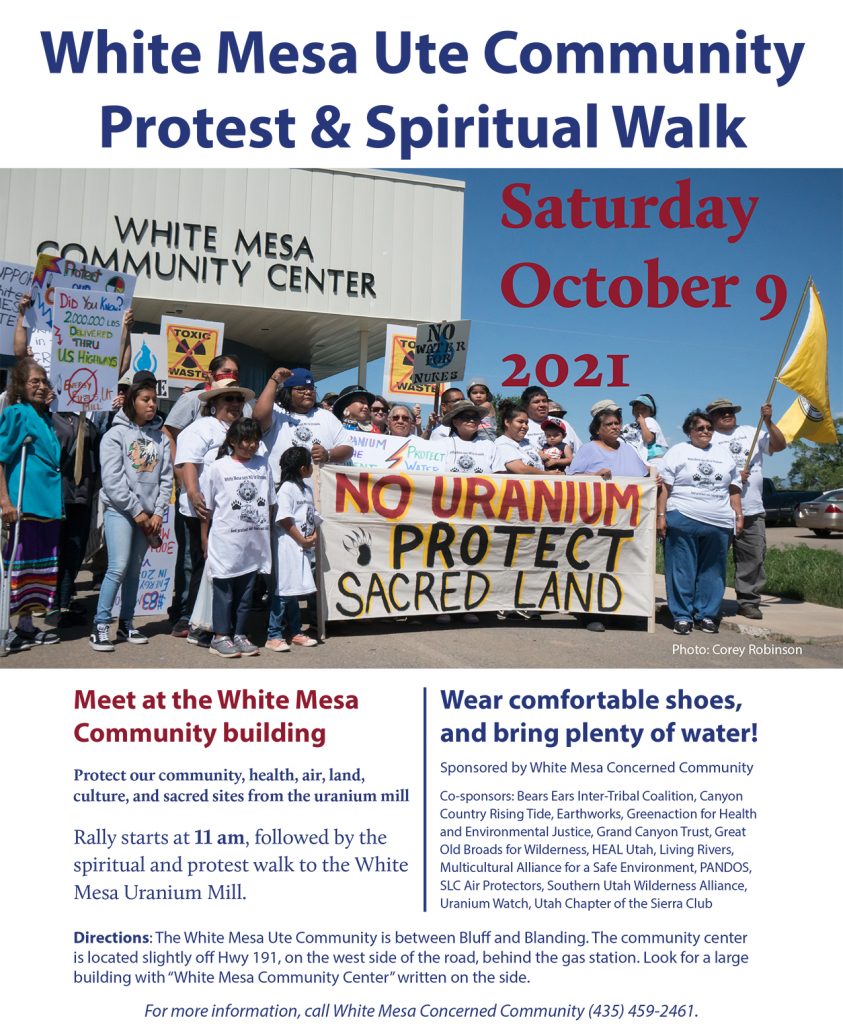 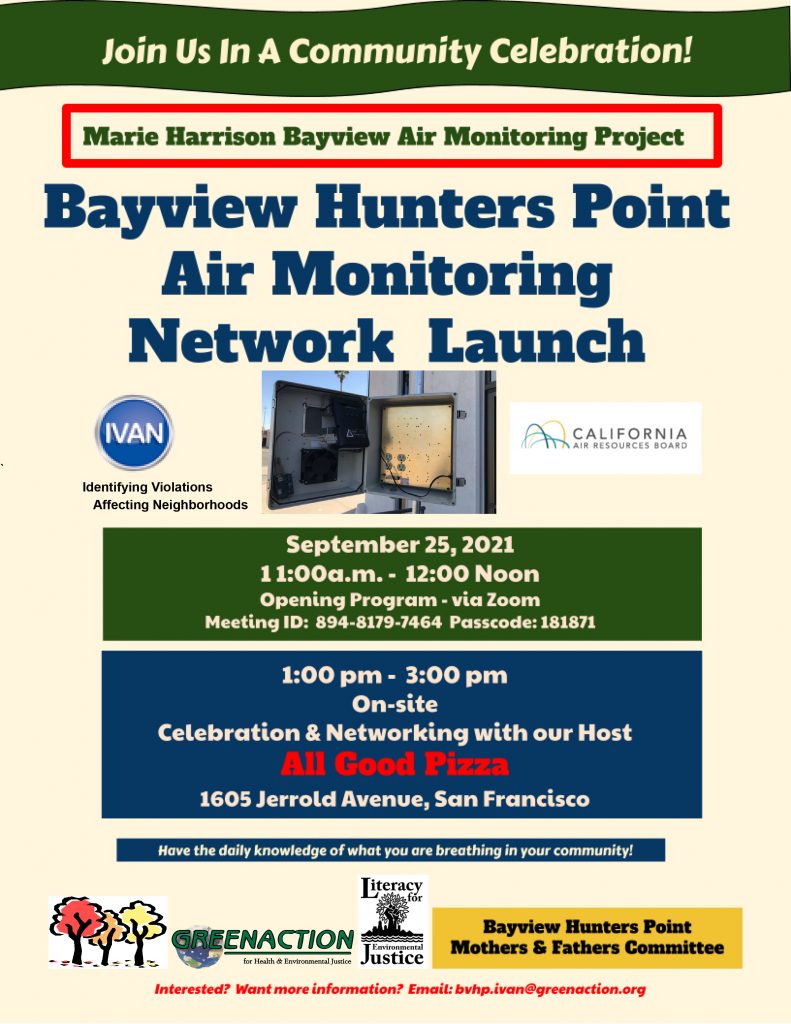 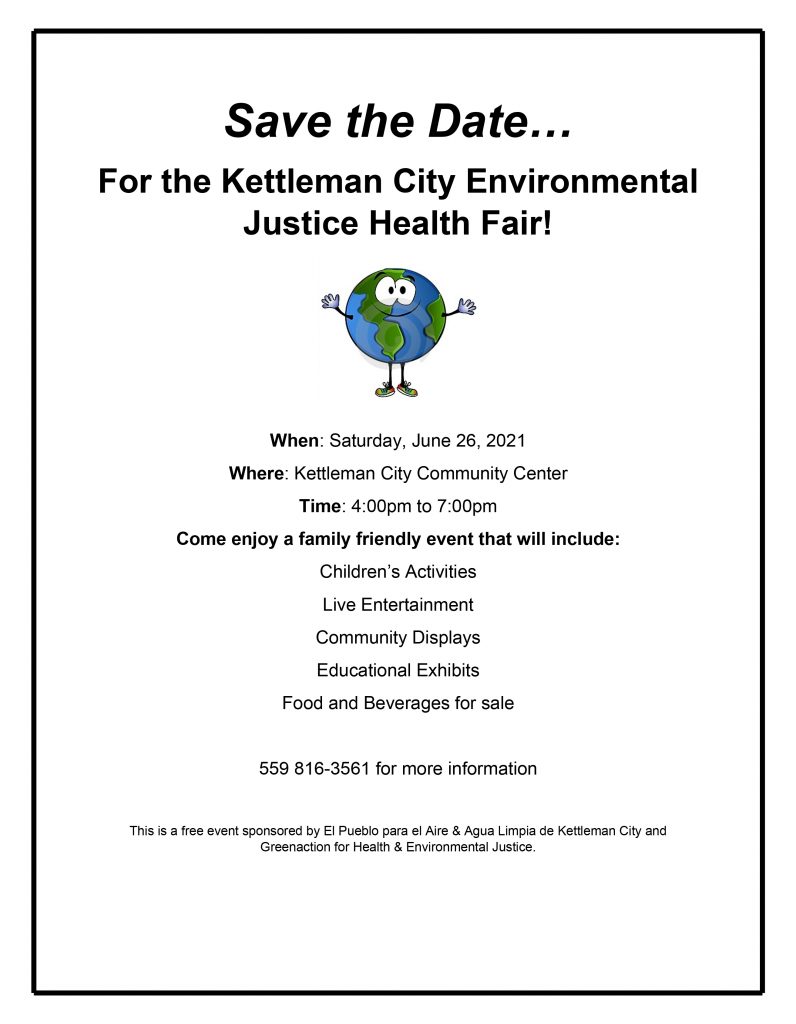 Come enjoy a family-friendly event that will include: 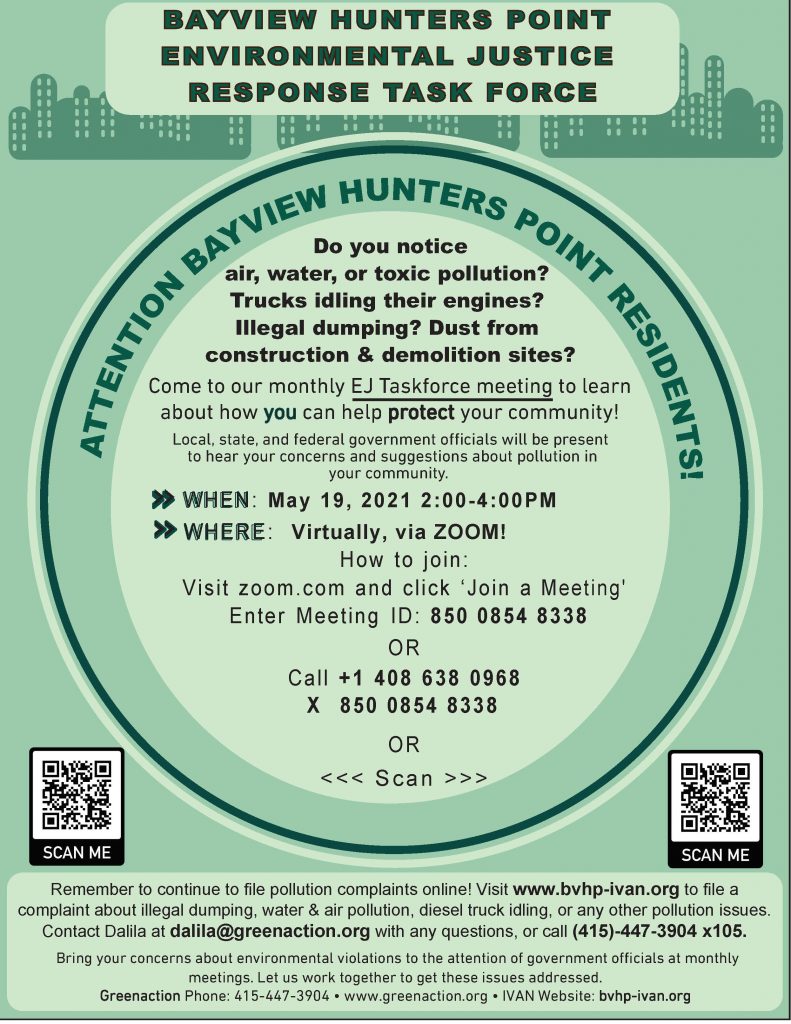 Come to our monthly EJ Taskforce meeting to learn about how you can help protect your community! Local, state, and federal government officials will be present to hear your concerns and suggestions about pollution in your community.

Bring your concerns about environmental violations to the attention of government officials at monthly meetings. Let us work together to get these issues addressed. Greenaction Phone: 415-447-3904 • www.greenaction.org • IVAN Website: bvhp-ivan.org

For more info on Line 3: https://www.stopline3.org/

What: Protest Wells Fargo’s funding of the Line 3 Pipeline!

Wells Fargo has been the world’s third largest financier of fossil fuels over the last five years, with $223 billion in lending and underwriting over 2016-20. It is the world’s leading funder of fracked oil and gas. It’s one of the leading funders of the Line 3 pipeline. 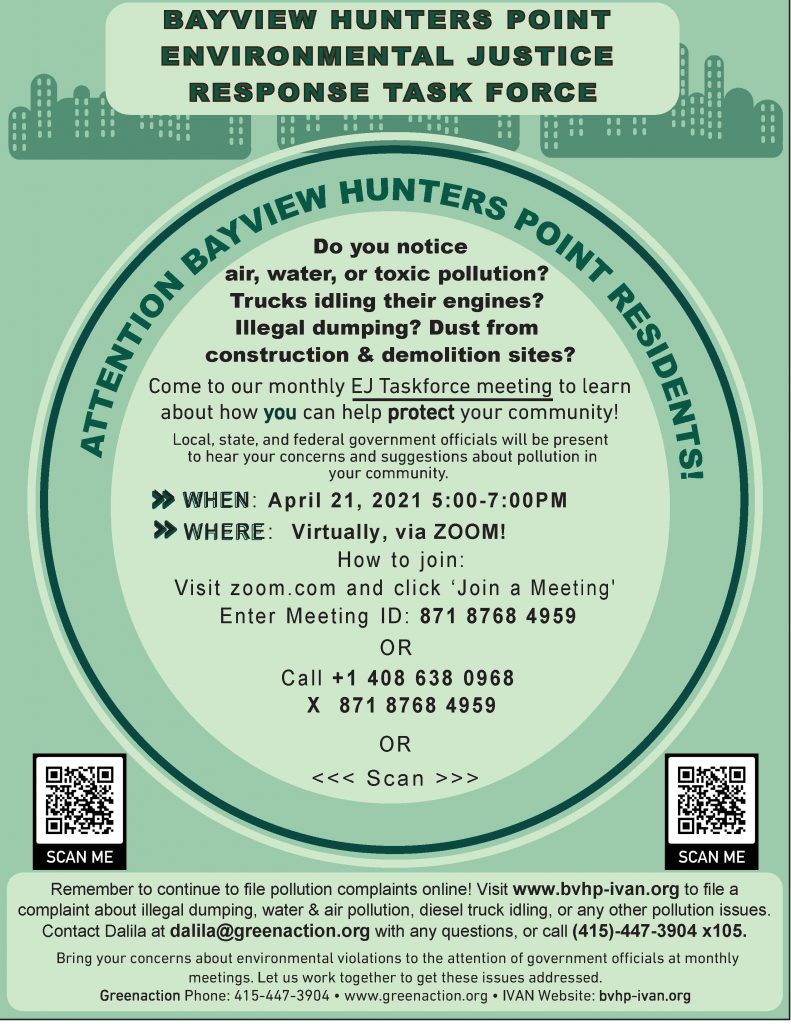 Notes:  Environmental Justice Response Taskforce is a group of dedicated community members and various environmental agency representatives that convene once a month (every third Wednesday) to review and discuss environmental reports submitted on IVAN Online (https://bvhp-ivan.org/), as well as other environmental concerns brought forth by the community. These meetings provide the community information on the San Francisco government’s plans and policies and the ability to hold them accountable. 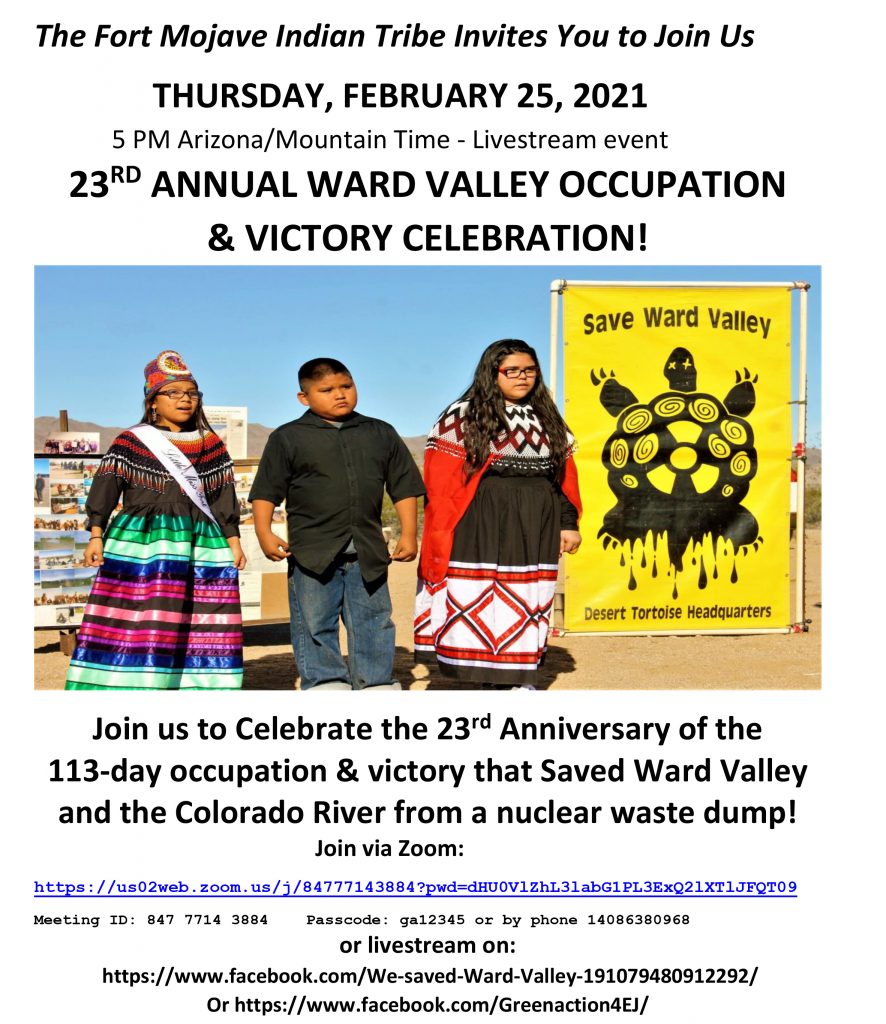 What is it about? Speak out at San Francisco Board of Supervisors Land Use Committee hearing regarding toxic and radioactive contamination at Treasure Island

Treasure Island was used by the Navy for weapons practice, ship and aircraft storage, and refueling, illegal dumping, open burning of “debris,” and repairing ships with deck markers painted with radium.

The training center for radiological decontamination, where the mock ship USS Pandemonium
containing cesium-137, a radioactive isotope, helped prepare for radiological warfare. The Navy dumped radioactive materials and other contaminants in large pits and in many locations on the Island.

Today, many low-income people of color live in subsidized housing on top of or right next to
radioactive and toxic contamination.

Join us to call on the Board of Supervisors, the State and US Government to:

JOIN US! At the Treasure Island Naval Station Environmental Restoration Advisory Board Meeting!

To the 6th Annual Zero Waste Youth Convergence! This year’s theme is Resilient Communities Fight Back: Equity in Zero Waste.

This convergence aims to empower students and young professionals to lead their communities to a zero waste future.The convergence brings professionals and activists who are working towards protecting and raising the voices of communities that have been damaged by the unjust dumping of toxic and hazardous waste. Maricela Mares-Alatorre, a Community Organizer and Policy Advocate with Greenaction for Health and Environmental Justice will be keynoting on Sunday, March 18th at 9am. Maricela has been fighting for environmental justice in Kettleman City and around the state since 1990, inciting local and state governments, and communities to action!

Join in discussion with the grassroots community and environmental justice leaders in the California Environmental Justice Coalition (CEJC) to learn about each other’s work, and how we can work together to strengthen the unity, solidarity and effectiveness of the environmental and climate justice movement in California. The CEJC is the largest and most diverse environmental justice coalition in the state, and operates on the principles of unity and solidarity. CEJC is a grassroots, community-led coalition of over 60 diverse organizations, and was founded in Kettleman City in the San Joaquin Valley in 2014.

Sunday, February 12, 2017 Ward Valley, CA – Join with the Native Nations along the Colorado River for the Annual Celebration of the 113 day Occupation and Victory that defeated the proposed Ward Valley nuclear waste dump.

Bayview Hunters Point Environmental Justice Task Force – Every Second Wednesday of the month! – Come join us for our next monthly convening of the  at the Southeast Community College (1800 Oakdale) in the Alice Pitcher Room in Bayview. Check out the Taskforce website to make a complaint.

December 3rd, 1:30 pm at the Chase Bank, 1201 Market Street (corner of 8th street), San Francisco. Join Greenaction in supporting the Standing Rock Sioux Tribe and the thousands of water protectors putting themselves on the line in North Dakota against the Dakota Access Pipeline! Check out our flier HERE and check in with our Facebook Event Page for updates and to show support HERE!

October 11, 2016, White Mesa, Utah: Greenaction joins Ute Mountain Ute Tribe and White Mesa tribal members in Protest March against the last uranium mill in the US located next to their reservation, on top of ancient culturally significant and sacred sites. See pictures HERE!

September 28, 2016: Attention Bayview Hunters Point Teens: Create and Star in your own original play with the never-silent SF Mime Troupe & Greenaction – please see the flier for more details on getting involved!

August 21-22, 2016: California Environmental Justice Coalition statewide conference and action in Sacramento, CA Join with grassroots groups in a statewide strategy conference, trainings and a day of action for environmental and climate justice.
-Read the invitation HERE!
-Check out the flier HERE!
-To Register please download the form and then submit the completed form by email to CEJCoalition@gmail.com.

Thursday April 21, 12PM! From the Bayview to the Mission to Treasure Island, LENNAR is toxic for our communities!!  Lennar Downtown Sales Office. 645 Howard, SF (between 2nd and 3rd street). Read, download and distribute our event flier here, and check in with us on Facebook at our Event Page. Read the Press Release HERE and download our new pamphlet on Lennar – What Lennar won’t tell you but We Will.

Thursday April 21, 2016: From the Bayview to the Mission to Treasure Island, LENNAR is toxic for our communities!! Rally with us on Thursday April 21, 12PM! Lennar Downtown Sales Office. 645 Howard, SF (between 2nd and 3rd street). Read, download and distribute our event flier here, and check in with us on Facebook at our Event Page.

California Department of Toxic Substances Control scientists of color denounce racial discrimination inside DTSC, as Greenaction and allies call for end to racism by DTSC inside the agency and in our communities: Read the news story in InsideEPA.com

Saturday, February 13, 2016 – (8 am California time) *Ward Valley Celebration!* – Join the Fort Mojave Indian Tribe, Greenaction and allies in the 18th annual commemoration of the 113 day peaceful occupation of Ward Valley that led to defeat of the proposed nuclear waste dump.

Join with our staff, Board members, volunteers and community leaders and enjoy good food, beverages and see our Environmental Justice photo exhibit.
See the flyer

Saturday May 31, 2014, Richmond, CA: Stop the Shipments of Crude Oil by Rail! Stop fracking and tar sands mining!  Join Greenaction and many environmental and climate justice allies in this important action at the Kinder Morgan LLC rail terminal to demand they stop transporting toxic and explosive crude oil from fracking and tar sands through our communities! Flyer here.

Tell the Bureau of Land Management US Department of the Interior to Stop Fracking our Public Lands!

Wednesday January 8, 2014 — Speak out against Fracking! Rally and Public Hearing in Bakersfield, California Rally Starts at 2:30pm. Public Comment Starts at 3pm and goes until 7pm. Where: Kern County Administrative Center, first floor board chambers, 1115 Truxtun Avenue, Bakersfield CA. What: Valley Community Residents including farmers and farmworkers, Greenaction and many other allies will call for a ban to fracking before publicly commenting on DOGGR’s bad regulations that don’t protect Valley communities health, environment and climate. http://greenaction.org/ban-fracking/

October 9, 2013- Rally and Action for Healthy Communities & Environmental Justice.  Join us at Noon in Sacramento Unite to demand Governor Jerry Brown and the State Department of Toxic Substances Control to get out of bed with polluters! Protect People, Not Polluters! No Permits for Repeat Offenders.

Friday, September 6, 2013 – Night of Solidarity for Environmental Justice in the Central Valley: A Fierce Green Fire  in Fresno, CA.

September 5, 2012- Speak out at Bay Area Air Quality Management District Board of Directors Meeting 9:45 am Protest the Whitewash of Chevron’s Toxic Fire in Richmond at 939 Ellis Street, San Francisco, CA

May 18 and 19, 2012. Public Meeting and Protest to Save Green and Colorado Rivers from Proposed Nuclear Plants Moab, Utah